Skip to content
You are here:Home-Uncategorized-A Conversation with Sculptor Basil Watson

A Conversation with Sculptor Basil Watson

The art world is in many ways just recently becoming aware of the extraordinary artistic achievements of contemporary Black artists.

Basil Watson is an exceptional artist and is clearly one of the world’s leading sculptors. The Windrush Monument in Britain and the MLK Statue in Atlanta have sealed his position as an important and outstanding sculptor in the world.

We recently visited his Lawrenceville, GA studio, where we saw a collection of his contemporary work. It was during the visit that the depth of Mr. Watson’s remarkable talent and outstanding achievements became most apparent.

We found his work to be classical, but very contemporary in tone. His art is very powerful, sensual in style and impactful in deliverance. His creative process is fluid, graceful and conscious with attention to the smallest detail of the human body, and expressions. He studies his subjects from both the literal and creative forms, and is consequently able to produce bodies of sculptural and artistic works that are well executed and detailed in structure.

Born into a family of creatives Basil Watson, (the son of Jamaican acclaimed artist, Barrington Watson), has been a gifted artist from a young age. He was raised in the beautiful and culturally diverse Island of Jamaica. The people, experience and environment has had an impact on him personally and professionally. Mr. Watson’s creative works, focus and ambition would lead him beyond the island where he would be commissioned to create many iconic and significant sculptures and monuments on the global stage.

The Windrush Monument is an exemplary representation of his global achievement The Monument, located in London, memorialises Caribbean immigrants, who went to the United Kingdom onboard the HMT Empire Windrushin 1948, and subsequently became known as the “Windrush Generation”. 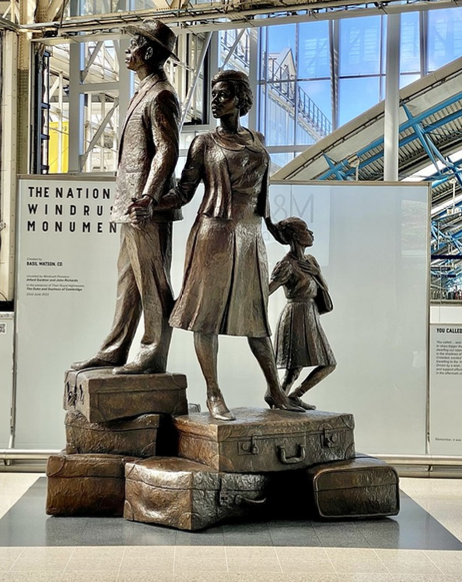 Sculptor Basil Watson was selected over a host of other artists, and commissioned by the British Government to create the Windrush Monument. Following its completion in June, 2022. “The Monument’ which is located in the Waterloo Station, in England, received a royal recognition, and was unveiled by Prince William, the then Duke of Cambridge, and celebrated by people around the globe.

In conversation with Mr. Watson, we learned about his passion, creative process, and philosophy of art. The conversation was led by Mr. Ludlow Bailey, who began his interview by asking Mr. Watson some questions about the Windrush Monument.

How did you learn about this opportunity? Why did you use the family to represent the Windrush generation?

I was contacted by the Windrush Monument committee; they were looking for an artist from Jamaica with a connection to the “Windrush Generation”.

What excited me most about the Windrush project was that it spoke about my own history and how the people of the Jamaican Diaspora ventured around the world. This was in fact the experience of my own family and generation. This spoke to my history and the history of the Jamaican people going to Europe and around the world trying to find a way forward.

What was the significance of the suitcases?

The suitcase was iconic and significant in the Jamaican folklore of the 60’s, and 70’s about a young girl coming to town with a suitcase like the one represented in the monument. The girl brought her culture, her pride and everything she owned, everything she needed in the suitcase. The suitcase became symbolic of her pride, consequently our pride, character, heritage.

It symbolised the foundation of the family’s journey and survival.

The 7 suitcases represent one for each day of the week. In the monument, they are standing on the 7 suitcases.

What was some of the creative challenge in executing this project?

The Windrush Generation spanned 2.5 decades. It took me a while to decide where to start the process of a design that would represent the story. The suitcases helped me in that process. Time was also a challenge because I only had 7 months to create, refine and deliver the completed monument. A considerably short time frame to design, create and deliver a monument of such historical magnitude.

What was the general feedback about the Monument from the British audience?

The feedback from the public at large and those of Jamaican descent specifically has been tremendous. During part of the development process, I lived in the UK for 7 months. When the monument was unveiled, many people were inspired. People saw their history, grandparents, and themselves. Many people also recognised the significance and icon nature of the suitcases. They too brought their suitcases with pride and took pictures with the suitcases in the monument. To those people it represented the dignity of the migrants and how they approach their lives in the UK. They see the Monument as a representation of their own family’s journey, history, story, and achievement.

What other well-known artist, besides your father, has had an influence in your style and technique?

My father opened the door to a lot of his experiences, particularly regarding his artistic experience in Europe. My early influences also came from Alexander Cooper, (drawing technique, and mentorship)’ Christopher Gonzales and Jean Pearson (influenced my Afrocentric vision, spirituality and my design esthetics). All of these artists influenced and contributed to the foundation of my early work.

Do you feel that living and growing up in Jamaica had an impact on your artistic vision?

Yes, very much so, especially, living in the Diaspora, I can see the Jamaican influence. I remember my earlier work of the “Three Graces”, also the title of a famous European painting. Unlike that painting however, my artistic interpretation speaks to the suffering and beauty of the black female figure and the exploitation of black women during slavery.

I am inspired by the energy and culture of black people in Jamaica. Black Jamaicans are very confident and they do not have to be validated. They know that they are beautiful.

Now that you have global recognition, what do you think is the responsibility of an artist in contemporary society?

As I gain more recognition and visibility, I understand that I have more responsibility in the kind of ideas that I promote in my art. I see my work getting the opportunity to speak on a bigger platform with a louder microphone. I accept and recognise that people are looking at me for leadership and I feel the responsibility to take it up more. There is greater demand for black stories. In the past, many galleries were reluctant to show the work, now galleries have an interest in works that speak about the black experience.

– You have stated that you are inspired by the “heroic in mankind.” Could you tell us more about this?

I feel that Jamaica has per capita the greatest number of global heroes in the world. I see most Jamaicans as heroic characters. Peter Tosh, Bob Marley, Marcus Garvey and Barrington Watson. I also think MLK and Nelson Mandela were also great heroes.

Who are some of your” living” heroes in the world?

I recognise Usain Bolt for his athletic achievements, but more for how he has represented Jamaica in the Global arena.

You have done Sculptures on “Nanny”, and Sam Sharpe”, can you unpack why you believe those people were important?

These individuals represent our roots and the indomitable spirit of the Jamaican people.

You have said that “Art is the Harmonious expression of one’s vision of life”, what do you mean?

We have to develop and own our vision that we want to share with the world. Art is a very powerful and important medium to create harmony and balance in the world. My mission is to create the kind of work that will inspire people to foster and promote harmony.

Do you have any upcoming major art projects and exhibitions in 2023 and beyond?

I am currently working on a “Bolt” Sculpture with him “taking a knee”, and other commissions in the pipeline.

What do you want your legacy to be?

I want my work to be part of the discussion on the “development of Global Harmony.” Global harmony is critical for the survival of humanity and for the creation of a world in which all mankind can live productive and creative lives. Even if my name is forgotten I pray that my work will always be remembered.

as part of the CADA Conversation Series.